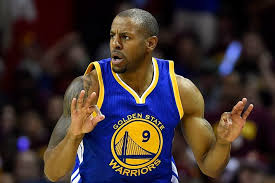 Metrical Mistake: Andre Iguodala just got robbed of the NBA 6th Man Award. Voters clearly looked at only the easy to measure, sexy but weak metric: points scored. I would argue that by using these bad metrics in publications, kids will get the wrong idea of what skills to focus on in their training.
1) Metrics are like fire: a powerful servant, but a dangerous master.
2) Singleton metrics aren’t worth spit. Use groups of metrics, ones that tie directly to the core goal: in this case, winning games.

Jamal Crawford, of the Los Angeles Clippers, took the award for the third time, which you’d might think that meant he was quite valuable.

By scoring a lot, in bursts, he is ranked highly. But his defense is so bad, his team is actually better off without him on the floor. Yes, Crawford scores a lot of points, but he lets the other team score even more!

Iggy was Finals MVP last year for the 2016 NBA champions, the Golden State Warriors. That’s a pretty solid indicator of value. The award is decided by a panel of nine high-end media members, after their detailed watching and commenting on of every game in the series. Experts with solid data: the qualitative view. Another qualitative view: Dre is a key part of the so-called Death Squad; the top-ranked lineup in the NBA. When these five guys are on the floor, they completely dominate. Everyone. Like, at a shocking level. The coaches put these guys on the floor together any time the game is on the line, and they deliver at the best rate in the conference. Jamal gets on the floor, and his team gets worse! So why did Crawford win? He’s a chucker: he physically can’t touch the ball without shooting the ball.

Let’s add a quantitative view to help out here: measured player actions and their impact on the overall game score. Then we compare a few different sets, and check for noise. Like, if a player you just know isn’t that great comes up rated in the top ten in the X composite metric, you know there is a flaw somewhere.

Example: one willowy center was getting killer PER numbers, one of the best aggregated stats. He was an anomaly: excellent numbers, but only in very specific scenarios and with very specific people around him. You knew he was an anomaly because he’s a bench player who gets limited burn; way less burn than any sane coach would give a normal player with such a high PER. Always validate your hard data with qualitative views.

Wow. Iggy outranks Jamal in almost every advanced stat! And in the regular stats, Jamal is ahead only on scoring-related statistics. Not shooting accuracy, not rebounding, not assists, not turnovers. Chuckers like Jamal are very overvalued as a result of people only seeing the easy metrics.

A final sample: Jamal’s  Defensive Real Plus Minus is the lowest of anyone on his team,  and is ranked 454th in the league. Andre’s rank in the league: 6th. And let’s not get into hustle stats 😉

[update] Whee! Somebody did a similar analysis; let’s shift the voting patterns for awards! http://www.theroar.com.au/2016/04/21/nba-living-past-crawfords-6th-man-award/ and http://www.basketballinsiders.com/a-closer-look-iguodala-as-sixth-man-of-the-year/