This piece is about a YouTube video that claimed to have proof that climate change is a myth. It accuses Greens of only quoting small samples of time to show climate change. It also covers the ‘500 scientists’ letter/scam to the UN.

Let’s see if we can agree on what time period is relevant. Here is the past 1,000 years of the two most important variables: temperature & C02. It captures the rise of the industrial revolution (the key forcing factor) and is long enough that local minima problems don’t exist. And here is something further back, based on ice cores. And here is one with human population against C02 levels. Sediment data gives us data even further back. 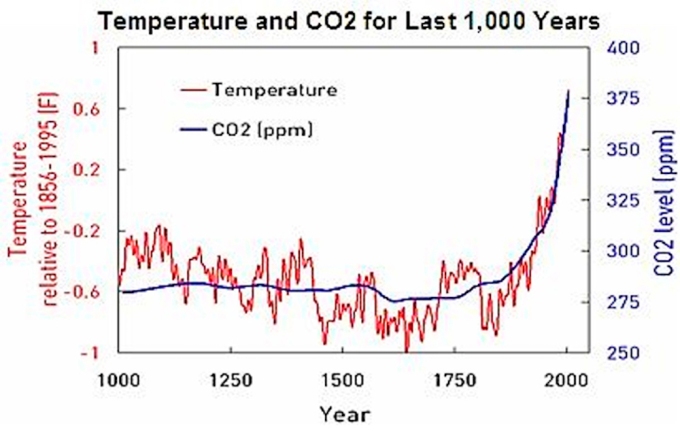 They clearly show long-term trends that break the normal shifts in climate. They also show the root of the problem: exponential growth in population, and the importance of the industrial revolution.

Then let’s try a thought experiment on the climate impact of the industrial revolution. There are 1.4 Billion cars in the world. Assume an average horsepower of 100. That’s 100 Billion horse-equivalents pushing new C02 into the atmosphere, every day. The 7.5 Billion people in the world consume over 21 Trillion kilowatt hours each year; that’s about 27 Trillion more horses pumping CO2 from power plants. There are over 50,000 container ships worldwide, each at 100,000 horsepower. Planes: 39,000 more, also at thousands of horsepower per plane.

So you’re telling me that adding over 30 Trillion horses to our environment, for hundreds of years, will not have an impact?

Let’s try shaving with Occam’s razor. It is clear that somebody is lying on the topic of climate change. But who, and why? The video you forwarded uses the “conspiracy to overthrow democratic governments” theory; that there is a shadow group, worldwide, who is manipulating things to scare people into a global government. Surely if such a group existed, they could find an easier way? And nobody has squealed on them yet, worldwide?

On the other side, we have billionaires and massive corporations who have their entire fortunes tied up in fossil fuels. If renewables take off, they are no longer the richest people on the planet. They provably hire places like the Heartland Institute to pump out misdirection and outright lies to introduce Doubt, just like the same group did for the Tobacco industry about the risks of smoking.

Which group do you think is more likely to be lying? A world conspiracy of scientists forge data in a plot to take over the world? But are exposed by a plucky group of oil companies and billionaires? Really?

Comparing the science on the two sides:
Over 30,000 climate scientists who work at the highest level in the field say climate change is a serious problem.
The most recent counter (a letter sent to the UN) 500 “scientists and professionals from related fields” say it is not.

So let’s look deeper at the two groups. The climate scientists who say “serious problem” had to pass the highest bar in research papers: publishing their work in peer-reviewed journals.

The “not a problem” petition has no bar. Of the 500 signatories, only a handful have a background in climate science, with the majority being writers, engineers and geologists with no direct expertise in the field. Note that this argument says “I’m right because scientists agree with me.” Why then would you believe 500 scientists versus the over 30,000 scientists who say increased C02 equals increased heat”?

The UN letter is headed by G. Berkhout; an acoustics engineer from the oil and gas industry. Of the visible signers, C. Monckton, a prominent denier has a degree in classics, not science. R. Berger is a geologist from the tar sands & shale side of the oil business. Terry Dunleavy is a former journalist, also with no qualifications. Viv Forbes is a geologist from the coal industry.

Their letter is embarrassingly bad. It basically hopes the reader doesn’t know how Google, or basic logic, works. Claiming that palm oil plantations that destroy orangutan habitat means renewables are bad is just stupid when you remember that The Whole Point Is To Stop Burning Things That Generate CO2! The typical ‘windmills kills birds’ forgets to mention that Oil Kills More.

C02 is a very stable molecule, so the effects are cumulative over hundreds of years. Some excess C02 does get absorbed beyond the normal C02/oxygen cycle, but note that a warming ocean can hold less C02. CO2 is also a proven greenhouse gas: it retains heat. Humans ‘only’ add about 29 gigatons of CO2 per year, vs the 750 gigatons moving through the carbon cycle each year, but the thing is, there is nowhere for most of it to go! So 29 GT per year adds up pretty quickly: one hundred years worth is 2,900 GT! And we increase the amount of C02 we produce each year, so the curve is actually worse than that. You can run an experiment yourself to show that CO2 retains heat. Yes, the sun and orbital conditions provide new heat, but because CO2 retains heat, we keep more heat that we used to and it all adds up…

You are right in that models are dependent on data, and thus are more decision aids than facts. The thing is, all major models have been back-validated (also called hindcasting), where you plug in the initial conditions from history, then simulate forward. You get something pretty close, which is the best you can do with a model of chaotic systems. I used to work for DARPA in simulation, so I am always skeptical of models too 😉 But if you run the models without the additional C02 factor, you get something wildly different. So clearly CO2 is important.

You are also right in that it is hard to buck the trend in journals. But there has been 50 years of open debate, and analysis. In the 1970’s there were 42 peer-reviewed papers suggesting a warming trend, and 7 predicted a cooling trend. The most recent literature survey, over the past ten years, shows 13,950 peer-reviewed papers, with a 99.99% chance of humans being the causal factor (24 dissenting papers). That’s 33,690 scientists putting their reputations on the line, not just staying silent out of fear.

I would argue that an open debate period of 50 years is enough to come to a working conclusion.

Here’s a longer one: 400,000 years, to capture the Milankovitch cycles and other naturally occurring conditions. https://skepticalscience.com/co2-lags-temperature.htm

One thought on “CO2 & 30 Trillion Horses (a thought experiment)”